The critical T1 spray or leaf 3 timing on winter wheat is fast approaching. As leaf 3 is responsible for approximately 10% of yield in winter wheat, the importance of keeping this leaf clean and free of disease should not be underestimated. A clean leaf 3 will reduce Septoria moving up the plant in rain splash events. To make the most of your T1 timing, leaf 3 should be fully emerged. Dissecting plants with a sharp scalpel as shown in Figure 1
is the best way to determine which leaf is actually emerging, by counting leaves back from the first leaf (flag leaf). Having this spray applied at the correct stage will leave you set up nicely for the next application at flag leaf (T2). Include a growth regulator at the T1 timing if necessary. 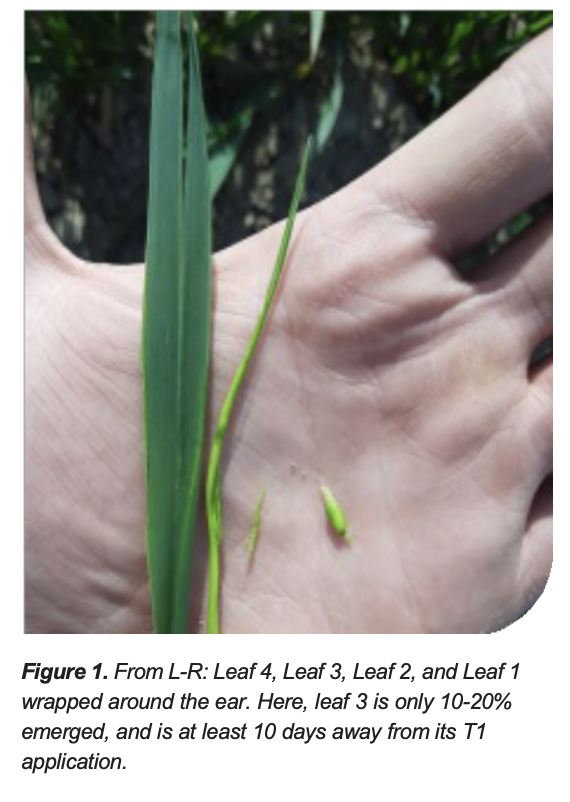 At the flag leaf timing, if you see some Septoria on leaf 3, it is an indication that your T1 timing was too late, or else that the T0 was too early. In summary, a correct T1 timing paves the way for a successful fungicide programme.

Be on the lookout for yellow rust, particularly on yellow rust prone varieties. As the life cycle can take only 7 days to complete, it spreads rapidly in the crop. Yield can be reduced as much as 30% in high pressure situations. However, it is one of the easier diseases to control in wheat, and robust T0 applications have given strong curative activity of this disease. Eyespot has been spotted on a number of crops in the north east as of late. This disease not only weakens the stem (lodging), but
restricts the movement of water and nutrients to the ear, causing whiteheads. Yield can be significantly affected.

Winter Barley T1’s should be completed by now, as well as fertiliser applications. Brown rust is present in some varieties. While it is early in the season to see Ramularia, it can be spotted as a small brown rectangular lesion surrounded by a yellow halo. Barley, unlike wheat, forms its yield potential early in the growing season. The majority of crops are well-tillered and are set up for strong yields come harvest.

Bring Winter Oats on index 1 soils to 165kg/N/ha. For every tonne of extra yield expected over 7.5t/ ha, increase N by 20kg/N/ha. Fertiliser application should be completed by GS 32.

Powdery mildew and crown rust as seen in Figure 2 are the diseases to watch out for at the moment. Mildew will effect both the yield and quality of winter oats, reducing yield by 10% in bad situations. Additionally, crown rust can reduce yield by up to 20%. As temperatures begin to increase and we come into the the summer months, crown rust will move into the crop. Varietal resistance coupled with a correct fungicide programme will control this disease. Apply T2 applications now if not already done. 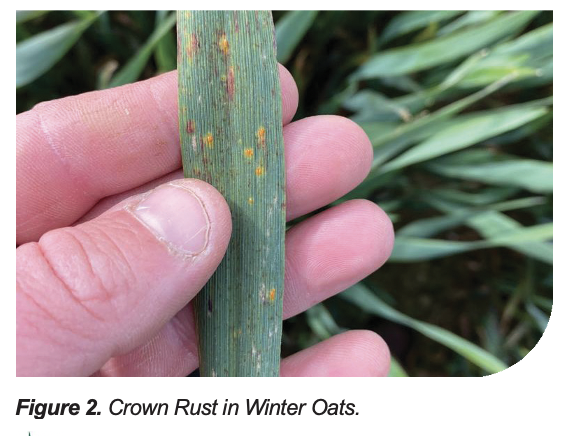 The spring sowing is almost finished at this stage. Early sown crops of barley are at the 2-3 leaf stage, the ideal timing for an aphicide and trace elements – seaweed and manganese – to reduce abiotic stress. Zinc could also be added to drive root development on slowly emerging crops. Ensuring crops have adequate micronutrients to promote tillering will be beneficial.

Apply a herbicide if necessary. Later sown crops have two leaves unfolded, with the third beginning to appear (GS 12-13). Aphid numbers appear high at present – with the warm weather. It is important to remember that later sown spring barley is at more of a threat to BYDV (Barley Yellow Dwarf Virus) than early sown – due to aphid activity. 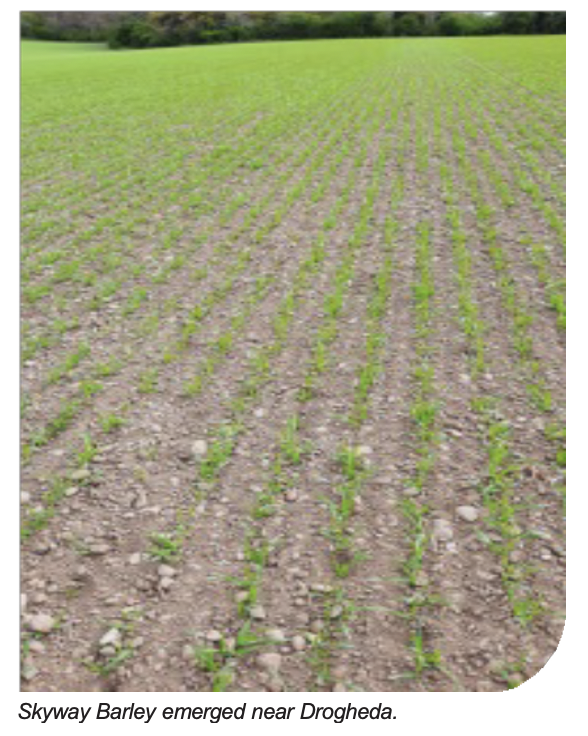 Be wary of leatherjackets, slugs and crows attacking crops, especially those that have not been rolled. Place some muesli under a slate overnight as bait for slugs. If there are more than 4 in the morning, consider treatment. Rolling is an effective way at reducing damage from slugs and leatherjackets.

Normally, weed control in spring cereals should be completed by the early tillering stage of the crop. One of the most important considerations when applying a herbicide is to only apply when there is a period of strong growth. Cold conditions trigger plants to produce a waxy layer on their surface – meaning the herbicide must pass through it before reaching the target. High growth causes the waxy layer to reduce and improves herbicide effectiveness. In terms of spring cereal nutrition, apply the final 2/3 of N at the mid-tillering stage. Speak to your Drummonds Agronomist for further information on this.

All winter crops should have nutrient requirements fulfilled by now. Leaf tissue analysis provided by Drummonds can reveal important details about the nutrient status of your crops. In order to maximise yield potential, correct nutrient deficiencies before GS 37 in wheat and before the head spray in winter barley. For further information about leaf analysis, Speak to your local Drummonds Agronomist.