The inclusion of red clover in grazing or cutting leys is a step towards improving whole farm feed efficiency in ruminant production systems. Clover plants are high in protein and therefore can reduce the need for bought in feed. Some producers are now growing exclusively red clover swards for both conservation and as a high protein finishing feedstuff which can be fed in-situ, but correct management must be employed to maximise its’ productivity.. 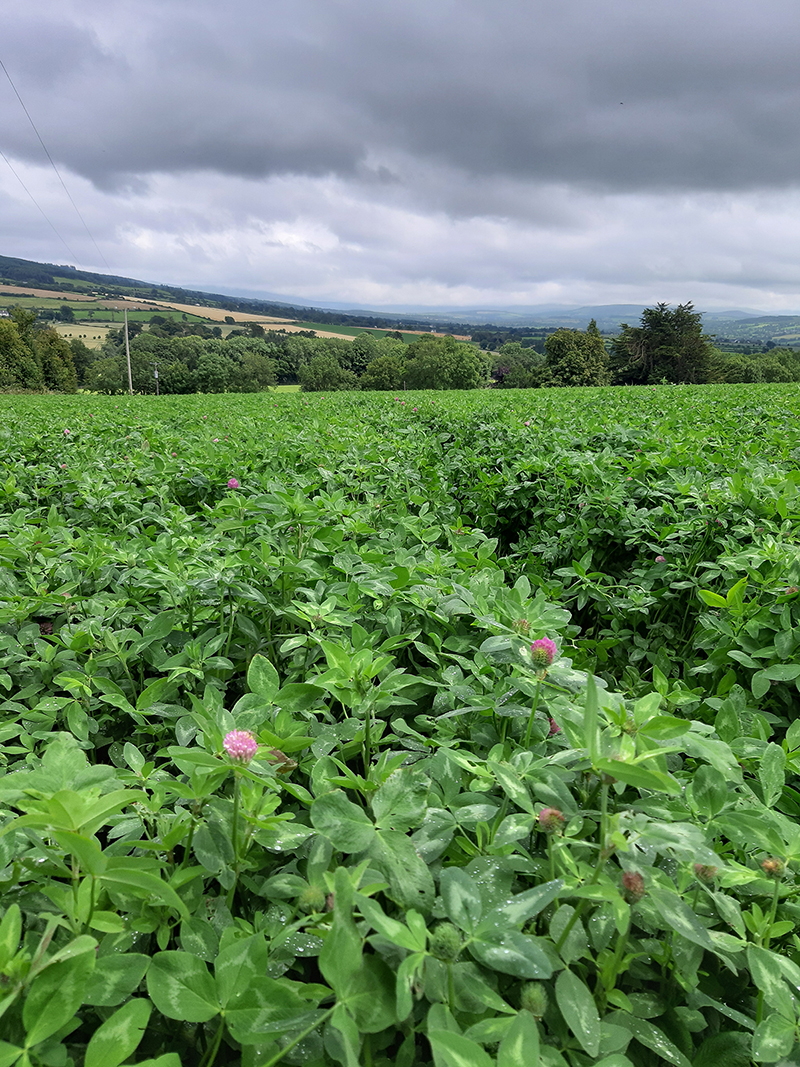 How to manage red clover:

Red clover needs careful management as it grows from a crown just above ground level, poor management will lead to this crown getting damaged and subsequently dying out of the sward. In a grazing situation, it must be remembered to leave slightly higher residuals (6-8cm) than with a grass ley. The same theory should be applied where conservation cuts are being taken on red clover swards. Red clover silage is a highly digestible and protein rich feedstuff, the aim should be to minimise turning before ensiling. Research has shown that as much as 5% of protein is lost with every turning of the crop where red clover dry matter (DM) levels are in excess of 30% (>30%DM). This can be attributed to ‘leaf shatter’ caused by the physical movement on the crop whilst wilting.

Red clover has a high buffering capacity. Buffering capacity notes the ability for the acidity or pH level to decrease to a desirable figure of 4 following a lactic acid fermentation. Using a silage additive for red clover silage is advisable, the purpose of silage additives is to control the preservation process so that by the time of feeding it has retained as many of the nutrients present in the original fresh forage as possible.

Red clover is primarily grown in a mixed sward, but increasingly it is being grown as a monoculture. Italian ryegrass, Hybrid ryegrass and Perennial ryegrass can all be sown as a companion species with red clover – it is advised to sow recommended varieties that are available from Drummonds.

Adding grass to the mix will enable greater carrying capacity, reduce poaching and crown damage to the red clover as well as improve the nutritional value of the sward.

Red clover swards are generally grown for high protein silage production, with aftermath grazing in the autumn. In terms of output, 10 -15 t/DM per hectare is achievable from red clover and companion grass swards, where soil indices and pH levels are fundamental to this. Crude protein content of red clover and ryegrass swards can be 5% - 6% higher than that of a pure ryegrass sward, allowing for increased animal performance. Ruminants are often revered as poor users of protein but red clover can have a positive impact on this. ‘Bypass protein’ is a term often associated with red clover. Natural compounds (Polyphenol oxidase) within the red clover plant envelope protein compounds whilst in the rumen but these compounds are then broken down when they enter the ‘true stomach’ or abomasum where the pH is slightly lower.

This allows for better utilisation of available protein.

Trials in AFBI show an increased dry matter intake of 1.6kg/DM day where cows were offered red clover/PRG silage vs. PRG silage only.
Grazing trials have also shown a 25% increase in the daily growth rate of weaned lambs grazing red clover versus than ryegrass swards, resulting in fewer days to finishing.

Trials in AFBI show an increased dry matter intake of 1.6kg/DM day where cows were offered red clover/PRG silage vs. PRG silage only. Grazing trials have also shown a 25% increase in the daily growth rate of weaned lambs grazing red clover versus than ryegrass swards, resulting in fewer days to finishing.

Alternatively, perennial ryegrass can be sown in Spring with broad leaved weeds being sprayed out before stitching in red clover at a later stage.